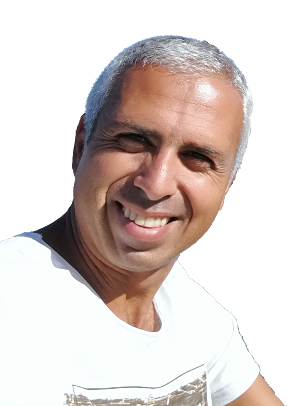 He was born in 1975 in Bulgaria. 22 years later he got graduated in geodesy (cartography). In his search of harmony he has done short trainings in Homeopathy, Prana healing and yoga classes. In 2005 he meets for the first time with the word of Osho by Family constellations workshop. The power of his experience in this therapy has opened a new page in his life. After that he keeps on taking part in many therapies and meditations, including trainings on Family constellations and Shamanic healing. In 2009 after two years training on Rebalancing he got certified and started working with people individually. His participation in Freedom process in 2010 changes his life dramatically – he lost 25 kilograms of extra weight and created and started leading his first workshops “Sense of food”. In 2012 he write his first short story, called Rovtaz. After two years of training in 2014 he got certified in Transessence technique. Same year for the first time he was  invited to work abroad in Moscow. In 2015 he creates the workshop “Completing unfinished relationships”. In 2016 he begins without finishing due to lack of money Somatic Experiencing training for trauma work by Peter Levin in Turkey and Italy. In 2017 he completes 2 year of training on Pulsations (Osho breath work) in Italy. Currently he is in Tantra teachers training in the school of SkyDancing, France. He leads workshops in festivals. Sometimes he is translating workshops and films